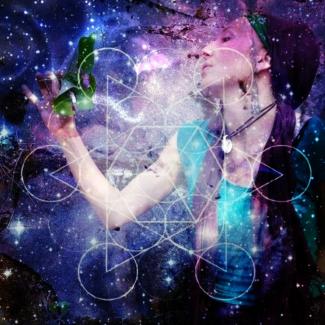 Born in Laguna Beach, California I grew up as a Mermaid; One with the Ocean of Emotion! The Goddess of the Ocean Yemaya offered to my Soul an ancient belonging unlike the estranged world of modern life where I felt as if I was a fish out of water being raised on a land full of fisherman. I remember growing up I would go to the beach as often as I could so that I could dive deep into the secrets held within the womb of the Yemaya, she who all life has come from originally. I loved as a child surfing her waves with my body like Sea Lion, twirling around and around in ecstasy like Dolphin, and at night when I slept I would return home being pulled out to the Sea as the song of Whales sang to me in my dreams.

With the Ocean as my first teacher I awakened to the memories of Lemuria and Atlantis and activated those Original Blueprints in my Earth walk. As I got older I real eyes’d due to battling depression from an early age that I was born an Empath unconsciously being trained to become a Healer and that after years of fine tuning my being; an Oracle come to help humanity ascend to 5D.

I spent my years growing up experimenting and studying everything from Shamanism, to Huna Wisdom, to Native American Teachings and the teachings of Animal Totems. I attended Healing Schools learning Massage, Reiki, and The Reconnection Work. I became an initiated Priestess through an Egyptian Mystery School and have shared my gift for Numerology and Tarot since I was twenty years old. I deep dived into Kundalini Yoga and Heart Yoga and married a Yogi when I was just twenty one.

Guided to leave America by my dreams and the “Wise Ones” whom are my Spirit Guides I work with, we moved to Canada and awoke to our first day being 9/11. After losing my husband to Kundalini burn out I raised two beautiful teenage Earth Angels primarily on my own while teaching at a Waldorf School here in the beautiful mountains of Nelson B.C.

While teaching I became certified as a Soul Realignment Practitioner and have since loved journeying through the Akashic Records unlocking and unblocking my client’s destiny. Now as I publish my first book called Frequency The Hour of Power Has Come which is a Sci-Fi Fantasy about ascending into 5D and the 5th Age of Peace as was prophesized by the Hopi people, I am called to begin my full time coaching practice helping people who are ready to ascend to 5D.

With my certifications as a Life Coach, Ho’oponopono Practitioner, Angel Therapist, Add Heart Facilitator, Level 3 Reconnection Healer, Soul Realignment Practitioner, Law of Attraction Wealth Practitioner, Aromatherapist, Yoga Teacher, Chakra Healer, (and yes the list goes on) … I have decided to put together a fabulous 5D Ascension Coach Practice which I would love to share with you.